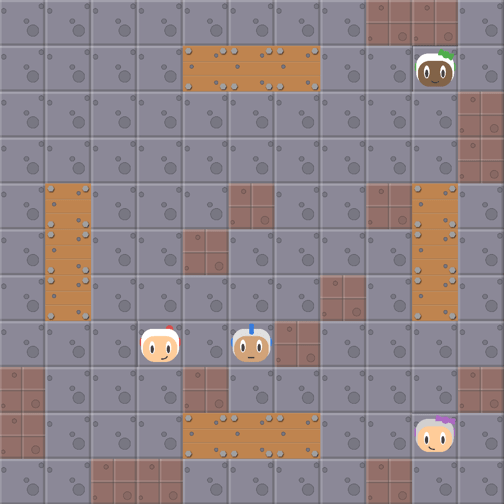 The Pommerman environment [1] is based off of the classic Nintendo console game, Bomberman. It was set up by a group of machine learning researchers to explore multi-agent learning and push state-of-the-art through competitive play in reinforcement learning.

The team competition was held on December 8, 2018 during the NeurIPS conference in Montreal. It involved 25 participants from all over the world. The Borealis AI team, consisting of Edmonton researchers Chao Gao, Pablo Hernandez-Leal, Bilal Kartal and research director, Matt Taylor, won 2nd place in the learning agents category, and 5th place in the global ranking including (non-learning) heuristic agents. As a reward, we got to haul a sweet NVIDIA Titan V GPU CEO Edition home. Here’s how we pulled it off.

1. The rules of engagement

The Pommerman team competition consists of four bomber agents placed at the corners of an 11 x 11 symmetrical board. There are two teams, each consisting of two agents.

An example of a Pommerman team game.

The Pommerman team competition is a very challenging benchmark for reinforcement learning methods. Here’s why:

An example of a full board with four agents.

An example of the partial observable views for each agent.

When an agent is in the early stage of training, it commits suicide many times.

After some training, the agent learns to place bombs near the opponent and move away from the blast.

Our learning agent (white) is highly skilled against a SimpleAgent. It avoids the blasts and also learns how to trick SimpleAgent to commit suicide in order to win without having to place any bombs.

When we examined the behavior of our learning agent against SimpleAgent we discovered that our agent had learned how to force SimpleAgent to commit suicide. It started when SimpleAgent first placed a bomb, then took a movement action to go toward a neighbor cell X. Our agent, after learning this opponent behaviour, then took a movement action to simultaneously go to the cell X, and thus, by game-engine forward model both were sent back to their original location in the next time step. In other words, our agent had learned a flaw in SimpleAgent and exploited this flaw to win the games by forcing it to commit suicide. This pattern was repeated until the bomb went off, successfully blasting SimpleAgent. This policy is optimal against SimpleAgent; however, it lacks generalization against other opponents since these learning agents learned to stop placing bombs and make themselves easy targets for exploitation.

Notes: This generalization over opponent policies is of utmost importance when dealing with dynamic multiagent environments and similar problems have also been encountered in Laser Tag [6].

In single-agent tasks, faulty (and strange) behaviors have also been observed [7]. A trained RL agent for CoastRunners discovered a spot in the game where, due to the unexpected mismatch between maximum possible reward and intended behaviour, RL agent can obtain higher scores in this spot rather than finishing the game.

A Skynet team is composed of a single neural network and is based on five building blocks:

We make use of the parameter sharing mechanism; that is, we allow the agents to share the parameters of a single network. This allows the network to be trained with the experiences of the two agents. However, it still allows for diverse behavior between agents because each agent receives different observations.

Additionally, we added dense rewards to help the agent improve learning performance. We took inspiration from the difference reward mechanism to provide agents with a more meaningful contribution of their behavior, this in contrast to simply using the single global reward.

Our third block, ActionFilter module, built on the philosophy of installing prior knowledge to the agent by telling the agent what it should not do, then allowed the agent to discover what to do by trial-and-error, i.e., learning. The benefit is twofold: 1.) the learning problem gets simplified; and 2.) superficial skills, such as avoiding flames or evading bombs in simple cases, are perfectly acquired by the agent.

It is worth mentioning that the above ActionFilter does not significantly slow down RL training as it is extremely fast. Together with neural net evaluation, each action still takes several milliseconds – a speed almost equivalent to pure neural net-forward inferring. For context, the time limit in the competition is 100 ms per move.

We let our team compete against a set of curriculum opponents:

The reason we allowed the opponent to not place a bomb is that we realized the neural net can focus on learning true “blasting” skills, and not a skill that solely relies the opponent’s mistakenly suicidal actions. Also, this strategy avoids training on “false positive” reward signal caused by an opponent’s involuntary suicide.

As shown in the figure below, the architecture first repeats four convolution layers, followed by two policy and value heads, respectively.

An example of a game between Skynet Team (Red) vs a team composed of two SimpleAgents (Blue).

The Pommerman team competition used a double-elimination style. The top three agents used tree search methods, i.e., they actively employed the game-forward model to look ahead for each decision by using heuristics. During the competition, these agents seemed to perform more bomb-kicking, which increased their chances of survival.

As mentioned in the introduction, our Skynet team won 2nd place on the category of learning agents, and 5th place on the global ranking, including (non-learning) heuristic agents. It is worth noting that scripted agents were not among the top players in this competition, which shows the high quality level amongst the tree search and learning methods.

Another one of our submissions, CautiousTeam, was based on SimpleAgent and – interestingly enough – wound up ranking 7th overall in the competition. CautiousTeam was submitted primarily for verifying the suspicion that a SimpleAgent without placing a bomb could be strong (or perhaps even stronger) than the winner [3] of the first competition held in June, i.e., a fully observable free-for-all scenario. It seems the competition results supported this suspicion.

Aside from being an interesting and (most importantly) fun environment, the Pommerman simulator was also designed as a benchmark for multiagent learning. We are currently exploring multi-agent deep reinforcement learning methods [5] by using Pommerman as a testbed.

We would like to thank the creators of the Pommerman testbed, the competition organizers and the growing Pommerman community on Discord. We look forward to future competitions.

[3] Hongwei, Zhou et al. “A hybrid search agent in pommerman.” Proceedings of the 13th International Conference on the Foundations of Digital Games. ACM, 2018.

In this section, we provide more details on some of the aforementioned concepts as follows:

Difference rewards: This is a method to better address the credit assignment challenge for multi-agent teams. Relying only on the external reward, both agents receive the same team (global) reward independently of what they did in the episode. However, this renders multi-agent learning more difficult, as spurious actions can occasionally be rewarded, or some of the agents can learn to do the most of the jobs while the rest learn to be lazy. However, difference rewards [14] propose to compute the individual contribution without hurting the coordination performance. The main idea is very tidy: you compute individual rewards by subtracting the counterfactual reward computed without corresponding agents’ actions to the external global reward signal. Thus, team members are encouraged to optimize the overall team performance but also optimize their own contribution, so that no lazy agents can arise.

Centralized training and decentralized execution: Even though the team game scenario comes with partially observable execution, you can only hack the game simulator to access the full state during training. With full state access, you can train a centralized value function, which is used during training for actor-critic setting, but deployed agents will only utilize the policy network, i.e. that are trained with partial observations.

Dense rewards: There can be cases where an agent commits suicide and the remaining team member terminates the opposing team by itself. In the simplest case, both team members would get a +1 reward – i.e., suicidal agent is reinforced! We altered the single stark external reward for the first dying team member in order to address this issue where the first dying agent gets a smaller reward than last surviving one. This helped our agent improve game-play performance, although this modification comes with some expected and some unforeseen consequences. For instance, under this setting we can never have a team where one agent sacrifices itself (in such a configuration that it dies with the enemy simultaneously) for the team to win or that allows it to allot less credit to a hard-working agent that terminated an enemy but died when battling the second enemy.

Action filter description: We implement a filter with two categories: